Debra Barley is the Director of St. John the Divine Early Learning Center in Jacksonville, Florida.  She has over 25 years of experience leading various child development organizations. Debra has a degree in Early Childhood Education and holds a National Director Credential from NICCM. Debra strives each day to accomplish the ELC's mission of providing an engaging, nurturing and stimulating Christian environment that focuses on the spiritual, physical and social development of every child.

The Board of Directors of the St. John the Divine Early Learning Center has high level oversight to ensure that the ELC is achieving its mission, vision and goals. The Board also has fiduciary responsibility and ensures long-term sustainability of the ELC. The Board is focused on strategic planning goals and long-range policies, rather than daily operation.

St. John the Divine is thankful for the guidance and leadership of its Board of Directors, which includes the Parish Priest, Church Parish Council President, Church members, community leaders/educators, and ELC parents.

2020-2021 St. John the Divine Early Learning Center Board of Directors and Officers 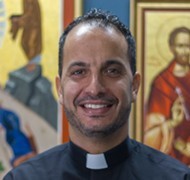 The Reverend Dr. Nicholas Louh was born in Jacksonville, Florida on September 25, 1974 and currently serves as the Senior Priest of St. John the Divine Greek Orthodox Church.

Upon graduating from the University of North Florida, Rev. Louh entered Holy Cross Greek Orthodox Seminary in Boston, Massachusetts and graduated with a highest distinction Masters of Divinity (1999) and a Masters of Theology (2000). He then attended Gordon Cornwell Theological Seminary where he earned a Doctorate of Ministry (2003) with an emphasis on Pastoral Counseling in the urban ministry.

Fr. Nicholas is known in both local and global communities as a devoted pastor, motivational speaker, and compassionate champion for those in need, and a passionate advocate for interfaith dialogue and social justice. Fr. Nicholas has a heart for guiding people through the difficulties of everyday life, by providing practical means to bridge their faith into their everyday life. He travels throughout the country leading retreats on understanding and living out God’s purpose. In addition to his role as pastor at St. John the Divine, Rev. Louh serves as the Vicar for the Eastern Florida Conference of the Holy Metropolis of Atlanta and is a member of the Metropolis Council.

In addition to his role as pastor at St. John the Divine, Rev. Louh serves as the Vicar for the Eastern Florida Conference of the Holy Metropolis of Atlanta and is a member of the Metropolis Council. He is also an Adjunct Professor of World Religions at the Florida State College at Jacksonville and is the chaplain for the Jacksonville Sharks Arena Football Team. He appears on WJCT radio as part of the “God Squad”, a monthly panel discussion broadcast program discussing a broad array of religious topics of current interest. He also proudly serves on several local and state boards, including OneJax, an interfaith organization. He is the co-host of a live call-in radio show with his wife, Dr. Roxanne Louh, called “Healthy Minds | Healthy Souls“, which can be found on Ancient Faith Radio on the 2nd and 4th Tuesday of every month at 8pm. Rev. Louh also shares daily inspirational radio messages on 92.5 FM Sports Radio, as well as on local cable television.